It wasn’t a good week for oil but it has turned around this morning as China has started to open up again, albeit only 7 borders and with some quotas but it’s a step and ahead of the Chinese New Year worth noting.

The jobs number on Friday, along with with pay data etc makes it increasingly likely that the Fed dont know what they are doing. Could it be that inflation has been tamed and rates will continue to go up?

The rig count showed a decline of 7 units overall to 772 but in oil it was only a fall of 3 to 618, not a good week to judge it but whatever happens I don’t see any big increase and subsequent increase in production. The E&P CEO’s all speak with the same tongue, on Friday it was the Pioneer boss who sees little liquidity in the market and ‘little US domestic increase in production’.

Touchstone has announced that its indirect wholly owned Trinidadian subsidiary, Primera Oil and Gas Limited, has entered into an Asset Exchange Agreement for the exchange of certain onshore Trinidad assets with Lease Operators Limited, a privately held Trinidadian entity.

·     The Transaction contemplates swapping producing legacy crude oil fields which we consider non-core due to limited scalability in exchange for highly prospective exploration and development acreage contiguous to our Ortoire block.

·   The Balata East block has a liquids facility which may potentially be used as a delivery point for future liquids volumes produced at Cascadura and Royston.

·     The Transaction also provides Touchstone access to an 18-kilometre oil pipeline that transects our Ortoire block.

·     Future potential production from the Rio Claro block is not subject to our current Ortoire block natural gas sales agreement with The National Gas Company of Trinidad and Tobago Limited, with any potential discoveries subject to separate product marketing arrangements.

Under the Agreement, Touchstone has agreed to swap its operated 100% working interests in the Fyzabad, San Francique and Barrackpore producing blocks for the counterparty’s working interest in the Rio Claro, Balata East and Balata Deep blocks for no cash consideration with the swap becoming effective upon closing. The Agreement remains subject to certain closing conditions, including receipt of applicable regulatory approvals and an extension of the Rio Claro Exploration and Production (Public Petroleum Rights) Licence (the “Rio Claro Licence”), and is expected to close prior to the end of 2023.

The 100% working interest Balata East block is governed by an Enhanced Production Service Contract with Heritage Petroleum Company Limited in the shallow horizon that is effective through June 30, 2030. The Balata Deep asset is a 100% working interest in the area identified in the Balata East block from a depth of 5,000 feet downwards with no limit. The Balata Deep block is governed by an Exploration and Production (Public Petroleum Rights) Licence with the Trinidad and Tobago Ministry of Energy and Energy Industries (“MEEI”), where the initial exploration period expires August 13, 2025. The Rio Claro Licence with the MEEI is currently expired, and an extension through August 2025 is a condition precedent for closing. The Rio Claro Licence is for an 80% operated working interest, with Heritage holding the remaining 20% working interest.

As at and during the year ended December 31, 2021, Touchstone’s Fyzabad, San Francique and Barrackpore blocks generated estimated aggregate operating netbacks of $1,453,000, with aggregate net liabilities of $89,000.

As at and during the year ended December 31, 2021, the Rio Claro, Balata East and Balata Deep blocks recorded estimated aggregate operating netbacks of negative $97,000 (unaudited) and had estimated net assets of $683,000 (unaudited).

“The proposed exchange of assets further high-grades our portfolio as we focus on the Herrera turbidite fairway directly offsetting our Ortoire block in close proximity to our Cascadura discovery. With the technical data that we have reviewed on the three licences, we have identified numerous drilling opportunities that can be incorporated into our infrastructure currently being constructed. A revised map reflecting the proposed Transaction can be found in our updated corporate presentation available on our website.”

This is a very useful property swap assuming that is that the technical team have correctly called the opportunities that give substantial potential upside at Herrera and there is no reason not to think that the deal will be substantially net positive for it.

At the Royston discovery and and at the Ortoire block these deals not only protect existing finds but also allows the company to extend them into the acreage. Such portfolio reorganisation is part of a high quality team being aware of adding reserves and production when it can do deals which provide added value.

I have been convinced for some years that the team at TXP have got a great, long term plan in place by which they constantly upgrade the portfolio in a meaningful scale. The overall quality and size of the asset base has always been a major reason for my positive view on the shares which rallied on original discovery and definitions of such a sizeable portfolio.

Now that along with moves like this announced today, together with the successful bringing on of Coho last year and the imminent delivery of Cascadura and of course Royston to come means that a fully funded TXP can justify a Target Price of 200p per share and as I write the Bucket list for this year I am inking in the company with its substantial potential upside.

Following the announcement dated 20 December 2022 by Serica that it had entered into an agreement to acquire the entire issued share capital of Tailwind Energy Investments Ltd, Serica announces the publication of a Circular to shareholders on the proposed transaction which will be posted later today and which can be found on its website: www.serica-energy.com. An updated presentation can also be found on the website. This announcement contains material new information and an update on the recent operational and financial performance of the two companies.

We are delighted by the transaction which we believe will improve cashflow and capital return predictability for shareholders and be immediately accretive on key metrics while also maintaining a strong balance sheet, providing increased resilience through the diversification of the Serica portfolio and create a platform for further growth in the future.

I look forward to working closely with our new colleagues to deliver on the range of opportunities this transaction creates for all our stakeholders.“

This substantial circular follows up the initial announcement which snuck in during Christmas week and the detailed nature of it, not republished in full here gives a great deal more data which backs up the management’s confidence.

I managed to get some time with Mitch Flegg recently and he clearly feels that ‘it ticks many boxes’ as it gives the opportunity for much needed diversification and addresses to exposure to the EPL. Indeed the company has said recently that it has been exposed to rather too much gas, somewhat incongruous I think after recent success but with more variable gas prices and high tax, having a portfolio ‘more balanced’ is now considered to be preferable.

Mercuria will own 28.9% of the enlarged capital as they want to remain exposed to the assets as well as cash of £58.7m making a cost of some £367m in addition to the Tailwind net debt of £277m. In addition there are very few decommissioning liabilities which is ‘remarkable’ and some significant tax losses.

There is little doubt that the deal leaves Serica stronger and much more diversified as with the two hub portfolio, cover for the dividend and capex demands. Add to that the reliance that Serica has on Bruce which would be hit hard by an extended shut-down you can see the reasons why the deal was done. Time will tell but it is interesting to note that along with the four founding partners the entire staff moving over numbers just 20…

In the process of updating the annual Bucket List this week I have looked at the numbers behind each candidate in order to confirm that they still have the appropriate qualities and this is no more justified than with Diversified Energy. The more I dig into the underlying value of the company the more I find that DEC delivers in current energy markets with its strategy developed over the last 20+years.

I looked at the most recent trading statement, for Q3 2022 which exhibits what have become regular features in financial updates and make me confident in the company’s ability to outperform its peers. The company has a practice of trading in line with market expectations, not only proving that the market is always up to speed with the performance but ensuring that key numbers such as production are correctly forecast.

DEC has become associated with regular dividend payments which have always been in line or higher than the previous announcement and distributions also taken the form of share buy backs which adroitly take advantage of the strength of the $. The company has also become known for its M&A policy and regularly announce acquisitions made or completed which often involves updating or upgrading the quality of its credit facilities and which includes a constant grip on strictly disciplined hedging policy.

This chart from the most recent presentation and which exemplifies the strategy and how it de-risks commodity price movements explains it well.

It shows that when Natural Gas prices fall they are offset by the higher hedged production portfolio( c.90%+) and as a result steady, reliable cash flow which delivers ~50% cash flow and that in itself pays a meaningful and growing dividend at the moment giving shareholders a 20%.

So, finally what I like most about DEC is that it gives investors a certain strength and a unique offering through its model which does not mimic E&Ps and accordingly is not exposed to large capex inflation and no notable service cost inflation for the company. 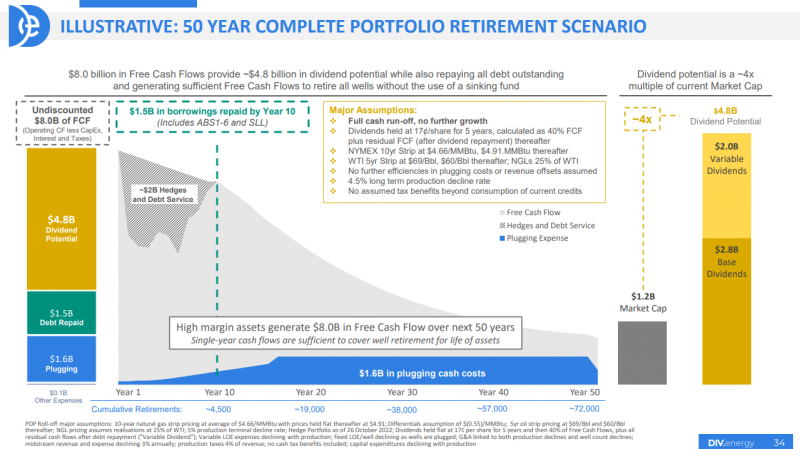 This chart to my eyes says it all and when I first saw it I understood why the company have coined it as ‘the Money Slide’. It illustrates that even when the long term commodity price environment is being more ‘conservative’ the large amount of FCF generation from the aforementioned business model not only pays down the debt, retires all 72K wells (and retires some of those that are still economic) but also has the ability to pay the target base dividend for over 50 years AND still have ~$2bn of cash left over that can also be paid to shareholders. So it really does come back to FCF generation as that is ~7X the current market cap.

So, DEC is in excellent shape, without doubt retains its place in the Bucket List and as I have always said justifies its existence as I would expect from its yield and capital growth attractions, not to mention the potential opportunity for Carbon Capture & Sequestration (CCS).

The FA Cup got to the 3rd round where the big boys come in and the smaller clubs get their chances. Winners expected to do well were the Red Devils, the Noisy Neighbours, the Foxes, Spurs and the Hammers. Upsets included the in the bird derby where the Owls beat top of the table Magpies, the Cods beat the Super Hoops, Wrexham beat the Sky Blues and Stevenage beat Villa, at Villa…

Still waiting for a  replay includes Boreham Wood and Accrington Stanley who drew and Liverpool and Wolves, neither side will relish the trip to the Seagulls if they win. Tonight Oxford United host the Gooners, prize for a win is  a trip to the Emptihad…