The fall in the oil price is relentless and shows no sign of changing although a bounce of some sort, either bear closing or of the dead cat variety will inevitably happen soon. Do not confuse this with equilibrium returning, that may take longer. This morning Brent is nearly a dollar easier at $96.21 as I write and with the contract expiring tonight more volatility is to be expected. The industrial production numbers from China are the latest knife in the back for the oil price, a substantial slow down in August resulted in the lowest number since 2008 at 6.8%, worse than economists had predicted. Supply remains abundant with Libya now at nearly 900/- b/d and rising but watch out for Saudi Arabia, exports may be dropping as down at $96 patience within even Opec may be wearing thin. It will be a fascinating glimpse into politics in the organisation as to weather the old-fashioned swing producer role will be enacted again or if a little pain is needed…

The figures being quoted, or mis-so, about Scotland’s oil have again brought out Sir Iain Wood, normally a fairly reticent character. This morning he reminds us that he is in neither campaign but ‘ I was drawn into this because they were misquoting figures from my own review’. The Scottish Government are going with 24bn barrels remaining whereas Sir Iain (backed by the majors) runs with 15-16bn barrels and of course in its recent review BP went with 3bn barrels recoverable. Compare this with production which was 4.6m b/d in 1999, 1.45m this year and expectations of 250/- b/d in 2050. Tax revenue from the North Sea was £12bn in April 2009, will be 4.67bn this year and is estimated to be £3.5bn in 2019…..

Hurricane has released the post-well data analysis on the recent Lancaster discovery which significantly increases the potential for the area. The pre-drill expectation of 4/- b/d were beaten and originally came in at 9,800 b/d constrained by kit, today’s third party analysis show that we are now looking at 20/- b/d or more from a ‘very good quality reservoir’. There is even more potential upside as they have found an oil-bearing Jurassic-Cretaceous sandstone interval which will need further testing. The good news just keeps on coming for Hurricane as it now appears that the early phase work leading to production will require only one more horizontal well thus reducing costs substantially.

This all points to a potentially significant increase in recoverable reserves in the Greater Lancaster Area in which Hurricane still owns a 100% interest. Much speculation has always centered around possible industry partners and I understand that the data room is to be re-populated with this information and will  open in early October. This gives the company the scope to consider all funding options and indeed select the best solutions for what is going to be a very exciting development, even the naysayers might find it difficult to grumble now. Hurricane has 100% of over 400mmboe of resources which makes it one of the leading UK exploration companies at the moment and proves that the good Doctor Trice was right about basement plays all after all.

I have been carrying a target price for Hurricane of 90p up until now but that looks to be on the low side following this announcement, I think that I will be adding at least 30p for the existing discovery (not including the potential of the conventional play) so the significant upside remains intact. I am aware that there is considerable industry scepticism about this prospect and its deliverability and the shares are only up a modest amount this morning which indicates that investors are nervous as well, they shouldn’t be and the shares are excellent value.

Results today from BPC but the statement is the interesting part of the announcement. The company is ‘engaged in on-going discussions with a range of companies as funding partners’ and also has developed a series of well locations offering optionality on cost and drilling execution risk. We are told to expect draft regulations from the Government ‘imminently’ which should come as no surprise after extended discussions. The board and senior executives have converted 20% of fixed salaries to bonuses which shows their commitment to the prospect. BPC has $12.4m of cash so is comfortable and with funding partners around the corner should be fine.

I have not seen the company for some time but to me the story remains the same, the prospect is extremely exciting and when the partners are introduced, drilling plan exhibited and a rig contracted, investors will be able to scale the potential upside, until then I remain on the side-lines. 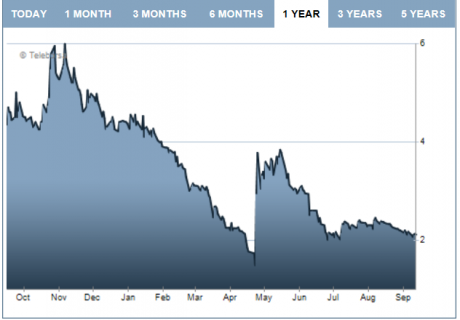 The company has said this morning that the delayed accounts will be lodged with the market after Wednesday’s announcement regarding funding obligations for the TAO-1 well. Given that they were carried and that the well completed early I am still struggling to think of what can have happened in this case, roll on Wednesday…

In the Premiership the big game ended 2-2 at the Emirates whilst Chelski continued to pile on the goals, four this time against Swansea. (OK Peter?) The HubCap Stealers lost at home to Villa which is noteworthy and the misery is piled on for Newcastle as they also shipped four against the saints. Whilst Pardew’s position is very shaky it is hard to see much better, no manager worth his salt will go there in order to be bossed around by the owner or his acolytes… And the season started properly for Man U as they cantered to a victory against Who PR also netting four.

Floyd Mayweather won on points and Khan unsurprisingly put himself up for a thrashing and Scott Quigg won easily too bring the fight with Frampton closer to actualite.

In the rugby Wasps fought a spirited fightback to beat current champions Northampton and the Sarries crushed the Quins at the Stoop.

Last night in the NFL, the Browns stunned the Saints with a late field goal to win 26-24. Cam Newton returned for the Panthers as they defeated the Lions. The Bears win in San Francisco thanks to 21 4th quarter points. The Broncos hand the Chiefs their second loss of the season after holding out 24-17. The Packers came back to beat the Jets to avoid going 0-2. The Seahawks suffered a shock defeat in San Diego as the Bengals, Patriots and Cowboys also win.