The first thing to say is that the Brent price is really around $99, the price above not reflective of realité. The two dollar turnaround was mainly started by the Opec Secretary General who gave an interview after a meeting with the Russian Oil Minister yesterday. Whilst saying that the current low price of oil was temporary he also suggested that at the next Opec meeting quotas may have to come down from the current level of 30m b/d to around 29.5m b/d. The trouble is that whilst all member of Opec want higher prices few are prepared to cut their own production and even if they do agree to pare back they usually cheat. I mean, current quotas are being exceeded by at least 500/- b/d before Saudi Aramco cut back recently. At least it shows that Opec are at least looking at the supply and demand numbers for next year.

The API inventory stats had the analysts in a right pickle, having forecasted a draw of 1.5m barrels, stocks unexpectedly rose by 3.3m barrels. I will hold judgement until the EIA numbers tonight to look at both crude and products as September can throw up some funnies across the board.

The statements from the Fed tonight will be interesting, markets are expecting further cuts in QE and to see if Janet Yellen will give a steer on interest rates, for oil watchers we need to see if the modest pick-up in the economy is coming through.

Another company with Interims out and as usual they mean not a lot. The story at Northern is all about the production play in Canada and this month has seen two wells at TD and the third preparing to spud, consequently we should expect to see results of production tests by the end of October. The key thing about Northern is that the proof of concept of the Canadian play is now sorted and it is now up to the company to deliver, with cash of $22m they are strongly funded and even Italy has seen the slightest glimmer of hope after the recent announcement by the Prime Minister. Finally, Northern has even managed to hang on to its previous record of changing brokers on a regular basis, today sees another advisor coming on board, in the old days that would be short-lived, now under new management it’s probably good news…

I recently interviewed CEO Keith Bush, go to www.malcysblog.com to see it.

It’s been a hectic few months for Petroceltic one way or another but underlying, things are looking quite a lot better than they might have. Production in the first half beat the guidance but only on a temporary basis, full year guidance has been raised though to 21-23/- boe/d. The farm-out to Sonatrach was completed and the gas sales agreement and FEED at Ain Tsila signed recently. With the raise of $100m in the summer the share price has rallied, although the chart looks  a bit topsy turvy most CEO’s and shareholders would settle for that in this market. The only fly in the ointment surrounds corporate governance, following the removal of independent non-execs and existing directors the board is no longer satisfactorily constituted and shareholders should be aware of this. 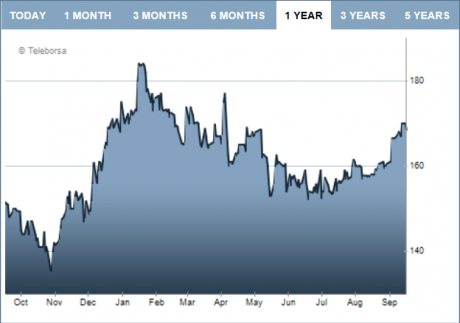 More interims but again the story is about the future, not the past, although the first half saw a welcome cash injection and a farm-out of Nervesa. Going forward Sound will drill the second well here and with the increase in NPV at Santa Maria Goretti increasing by 82% and gas sales now covering all costs in Italy things are indeed looking up. Of course the market is eyeing up the potentially massive Badile prospect, which would indeed be a company maker (circa 40-50p per share) and with the data room open a farm-out is likely here at some stage as well. But Sound has a number of other exciting projects in the portfolio such as Laura and as I have said before, 2015 is going to be an interesting year and I remain very positive.

Again, a CEO interview with James Parsons on www.malcysblog.com

BP makes the news again but this time for upsetting the judge by using ‘college tricks’ to try and beat the page count in a submission to court. Apparently they manipulated line spacings to fit extra pages of text into a court document, the judge said that BP ‘abused the page limit’ and that the court shouldn’t have to ‘waste its time policing such simple rules’ This comes into the ‘you couldn’t make it up’ category and would make me laugh if it wasn’t all so tragic!

And there I was up early to look at the Tangiers announcements about TAO-1 and of course the long-awaited delayed interims from the company. Clearly such big figures take a long time to add up as they have delayed the above until the 24th of September and the shares remain suspended. Fortune favours the brave but it certainly doesn’t reward shareholders although they were warned…

Mainly football as the HubCap Stealers struggled to a late win against Bulgarian minnows Ludogorets last night.  In the same group Real Madrid beat Basel 5-1 so its all on the games against the Swiss I suspect. The Gooners got despatched 2-0 and they were lucky to get nil, Danny Welbeck confirmed his class, missing a sitter as he used to at Old Trafford. Tonight its Bayern against the Noisy Neighbours and Chelski play Schalke, Nigel ‘the wizard of odds’ Seeley at TipTV advises going all-in on Chels as they are hot and Schalke are not…

And Jonathan Trott wants his place in the England side back after scoring a few runs in the Championship this summer..