Precarious it is, that is Brent, sitting like a tight rope walker on the brink of falling into the circus held up only by Chinese imports. Well it’s not quite that bad but the US Labor data on Friday took away one of the few remaining props on the demand side although those Chinese imports, up 6% in August, have a familiar ring about them i.e. keep the buying order on near the big figure. The CFTC data last week showed a continuing fall in WTI net long speculative positions and there is no sign of that being any different for Brent.

Indeed, there are signs that the world is beginning to get together like not before in the attack against ISIS. I have heard rumours of talks between Iran and Saudi Arabia, of ‘contacts’ being established at the highest level between Iran and the great Satan and the new Iraqi Government is apparently nearly ready to launch in a much more cross-religious fashion.

BP has wheeled the big guns out in their combination of lawsuits in the USA. The FT reports today that the UK Government has defended BP on the oil spill pay-out scandal by warning that it could make the US ‘a less attractive place to invest’. ( Would that be a ‘less attractive’ place than Scotland after next week I wonder?) Next up is the formidable Institute of Directors who suggest that at 67%, BP are carrying a ‘disproportionate burden of responsibility’ for the incident. (Isn’t that what Operators do?)  Finally the normally quite sensible Lord Digby Jones, (advisor to BP) thinks that Judge Barbier maybe isn’t quite so impartial as he might be but then he didn’t start this process he would argue…

Not entirely unconnected is the future funding of Rosneft, as I reported last month, CEO Igor Sechin has asked the Government for a few trillion roubles, about $40bn worth actually and the Russian Prime Minister has worked out the economics of the situation saying, ‘ Rosneft needs to maintain production levels as it is a major source of tax revenue’. Of course the alternative is a rights issue and even I can do these sums on behalf of the BP treasury, it goes like this, 20% of $40bn = ohmigod……………….

Better news at long last for Genel this morning as they announce that they are to return to ‘normal staffing levels’ in Kurdistan. Also in the good news department is that production from Taq Taq and Tawke is at ‘record levels’ and pumping out 234/- b/d of which 182/- b/d is going down the pipeline. Whilst the Kurdistan stocks still carry country risk it is probably overstated in the share prices of both Genel and GKP.

And there was me thinking it was going to be a red letter day for Tangiers after they signalled that the long share price suspension would end today. As it is they merely released a statement saying that the shares ‘continue to be suspended pending release of an announcement to the market in relation to Tangiers’ funding obligation for the TAO-1 exploration well’. Looks like it may be a red ink day rather than a red letter one as the quest for more money is appropriately taking some time by the looks of it…

I’m going to do a bigger write up on San Leon in a couple of weeks time as I have at long last got a date in the diary with Oisin Fanning for a full update on strategy etc. In the meantime he appears to have slotted in a couple of useful assets into the portfolio at minimal cost. SL has acquired the Petromaroc (formerly Longreach) 1.5% NWI in the Sidi Moussa licence offshore Morocco for the cost of its share of expenditure and also taken on the 22.5% NWI in the Tarfaya onshore licence on the same basis. There are plenty of views around on Morocco, both onshore and offshore but it would be unwise to write anything off yet so it looks like Oisin may have done a useful if not mind-blowing deal here.

Shell are spending money again………….but only a few millions as it has, in partnership with the Oman Sovereign wealth fund, invested in Glasspoint a California based company using solar power to enhance oil production very useful in the Middle East.

They are ringing the changes at Eland Oil & Gas as CFO George Maxwell takes over as CEO and non-exec and former city stockbroker (yup, it’s happened again) Louis Castro slips into the CFO seat, when will it all end?

Sound Oil has elevated Luca Madeddu to the main board, this is indeed worthy stuff as the Milan office continues to power the success story that is Sound at the moment. On a recent visit to the operations out there I spent two days with Luca, and his promotion to the board is both overdue and extremely justified.

Caza Oil & Gas is quietly adding significant production at its Bone Springs properties and whilst the stock market has yet to appreciate it the industry certainly hasn’t. This chart below shows the Bone Springs coming into the chart at No 4 and with some proper band-width and will be interesting more than just stock market investors soon… 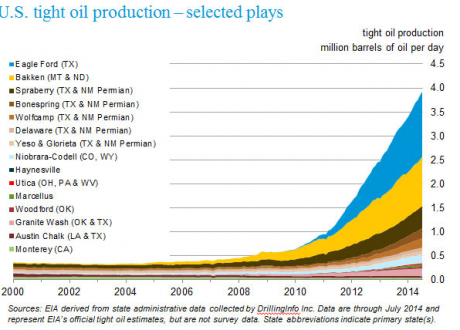 There was a lot of sport over the weekend and it continues tonight with both tennis and football action.

In the tennis, Serena won the ladies over at Flushing Meadow but in the men’s who  would have had a Kei Nishikiri v Marin Cilic final?

In the football Germany beat Scotland against all the odds, or at least Gordon Strachan thought they would win…and tonight England play Switzerland, the favourites in their Euro qualifying group.

Carl Frampton put on an amazing display against the iron-like Kiko Martinez to win the World Super-Bantamweight title in Belfast on Saturday night.

Did he, didn’t he you are all asking? Well there are those who say that Rosberg deliberately went off the track to let Lewis through but I couldn’t possibly comment…

And the final home international of the cricket season threw up a thrilling finale as England beat India in the one-off T20 game yesterday. If only Captain Cook could take a break until the next test series…

The NFL season kicked off this weekend as the Seattle Seahawks began their Super bowl defence with a blowout victory over the Packers. Star of last season, Marshawn Lynch ran for two touchdowns in a resounding win that must confirm the Seahawks as favourites to retain their crown.

Last night saw the Falcons defeat the Saints in overtime. The Bills also needed overtime to win in Chicago.

The Eagles scored 34 unanswered points after going down 17-0 against the Jaguars.

The Titans had a big win in Kansas as the Broncos, Panthers and Dolphins were also winners on the opening weekend of the season.

In the late televised game, Kaepernick led the 49ers to victory over Tony Romo and the Cowboys

Finally, after all the publicity surrounding Johnny Manziel in Cleveland, the Browns didn’t start him. They lost to a late field goal in Pittsburgh.