A very modest rebound, certainly in Brent yesterday and this morning, WTI is performing much better than most other crudes especially as Opec countries are touting big discounts for October deliveries. This small bounce is partly due to a rebound after five bad days and partly due to worries about Russian supplies that might be affected by the EU and US sanctions about to come into effect. Although they are promised to be lifted if the current truce is maintained the US in particular are showing few signs of backing off.

The weakness over the last few days has been mainly down to the continued supply situation and of course all the agencies monthly reports that have been coming out. Yesterday saw the IEA one which came too late for the blog but was nevertheless equally ruthless in taking the ‘canife’ to demand projections. With a cut in demand projections for 2015 and comments such as ‘a plentiful supply despite festering conflicts in Iraq and Libya’ the IEA makes the oil market look decidedly dodgy for the next few months. Without trying to overdo the figures they are quite difficult to avoid, in Q4 2014 demand is down 100/- b/d to 93.9m b/d and for the first half of 2015 they lose another 100/- b/d to 92.9m b/d with growth at only 1.2m b/d.

With non-Opec supply up 1.63m b/d in 2014 and another 1.28m b/d next year the call on Opec crude will fall, down to 30.6m b/d this year and with a downward revision of another 350/- b/d next year will be nearer 28.9m b/d. With current production of 30.4m b/d as Mr Mikawber would say, result misery. Now I know what most of you are thinking…………….the IEA almost always get things wrong, the trouble is that this time all three agencies, i.e. the IEA as well as Opec and the EIA are in about the same ballpark which is a bit of a worry. So, absent any supply disruption or a remarkable economic pickup in China or Western nations things are likely to remain under pressure for the time being.

Given that there is virtually no news out this morning (apologies Keith, I know your share options mean a lot to you!) I will catch up on a few pieces of random news out in the last few days. Eni boss Claudio Descalzi is under investigation over the acquisition of Nigerian block OPL 245 some time ago where it is the final resting place of the cash which has attracted the eyes of the Italian prosecutors.

During the week Premier announced that the Solan subsea oil storage tank, jacket and topsides have all been at installed at last…

And Alkane Energy, a big favourite here announced a good set in interims albeit clouded by corporate activity and exceptionals. This was a ‘transformational period’ where they increased installed capacity by 69%, did deals on Wheldale and with Egdon and post the period end acquired three more power response sites. Alkane will gain from the ‘deteriorating’ UK generating capacity and remains one of my top picks.

And I want to give a quick plug to a charity event that the oil industry is organising on behalf of the RNLI. Thursday 13th November sees the Rock ‘n’ Oil dinner and gig featuring Red Dawg starring Graham Stewart of Faroe Petroleum and Head North with Andrew Rose of Azonto Petroleum. Interested, find Ben Romney at Buchanan.

The big rugby game is tonight as the Quins take on the Sarries which might be tasty although the latter may be too much even at this early stage of the season.

Yorkshire have won the County Championship, easily beating Notts today and with a match to spare as well.

Back to Premiership football this weekend and the standout fixture is the Gooners against the Noisy Neighbours whilst there are top of the table clashes between Chelsea and Swansea and the HubCap Stealers against the Villa. Sunday sees QPR going to the Theatre of Dreams with high hopes as most people seem to nowadays…

So a good reason why Man U fans need an iPhone 6 Plus….. 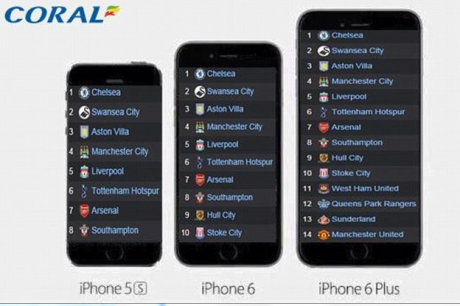