More of the same I’m afraid as the oil price is taking more cognisance of physical supply than of geopolitical threats. All of those threats still exist and with fighting reported yesterday in the north of Iraq between ISIS and Kurdish troops around the Ain Zalah oil field worse must still be to come. In Libya, fighting continues in Tripoli and western employees are being taken out, in some cases by the Royal Navy, meantime oil exports remain at around 500,000 b/d.

The economic stats last week from China and the US were probably as good as might have been expected, the labour data on Friday was a touch shy of expectations but six months of above 200/- jobs created is a high for many years. Stock markets however have boiled over and hedge funds in the US appear to be shorting markets after an unsuccessful raid on crude oil.

Galp has announced the results of the Tao-1 Tarfaya offshore Morocco well, its a dry hole. They found nothing at the primary objective, the Trident in the Middle Jurassic and they also tested the Assaka prospect in the Upper Jurassic which was also dry. The shares, which fell 40% last week after initial results were disappointing have fallen nearly 70% this morning. Tangiers could well end up being a textbook management school case of how to louse up a perfectly good company in one stroke. Not long ago the shareholders had a first class management team who were in the process of an eminently sensible merger with Jacka. However, for some shareholders this was clearly not enough risk so they fired the team and called off the deal. With the company’s future riding on a 25% stake in Tao-1 they came to London to raise a bit more money, how they did that only higher beings know but some people clearly enjoy such risk. Where the company goes from here is anyone’s guess, I cant tell you about the CEO as he failed to turn up to our meeting a while ago but if they ring you up looking for money I would suggest that you reply in the briefest of words.

More news today from Range as the restructuring continues, this time it is the long term fallout from the disastrous IOP bid coming back to haunt them. Range have quite correctly decided to try and get something out of this deal that is better than nothing and actually this looks better to me than I was expecting. Knowing that the $8m loan was not going to be repaid – it is already overdue-  Range has extended the date to November 2014 at which stage it will hope for $500/- in cash and the rest will be converted into a 9% holding in IOP. In addition there are 5m IOP options exercisable at 6c for 24 months for good measure. This deal is eminently sensible, if IOP is as bust as it looks the loan would have been no good anyway and if it rises like Lazarus then they will capture a good part of the upside. It does however, show us just how much work the new management team has had to do in only six months at the helm for which they should be given a great deal of credit.

Independent Oil & Gas – A Venture into the known…

I recently had the opportunity to meet with the senior management of Independent, namely Mark Routh, CEO and Peter Young, CFO. Independent was on the verge of an IPO a couple of years ago with the intention of raising around $40m but circumstances conspired against them and it didn’t happen. Instead they came back to the market last September and with a very small raise in order to get things under way. IOG is well managed and has a strong board which punches above its weight in the sector, Mark Routh sold his business to Venture Production in 2006 and management has 56% of this company. With non-execs like Mehdi Varzi, Paul Murray and Marie-Louise Clayton exercising powerful influence, holders can be confident that advice will be useful when given.

The IOG strategy is to develop production hubs with modest exploration primarily nearby, growth is expected to be from the 28th round and various corporate strategies. The company is North Sea focused and based around the Blythe, Cronx and Skipper fields where the primary focus will be to develop and initiate production from these assets. First gas is expected from Blythe in 2016 and with Cronx coming on-stream in 2017 and Skipper in 2018 the company target 25,000 boe/d within ten years. The 28th round will be very important to IOG, they have spent a lot of time highgrading a large number of projects and  this has been whittled down to just three favourites, I would suggest that if awarded them COS will be very high.

The big question for IOG I suppose is funding, without the boost of a big raise at IPO I would suggest that the company does need a lump of equity although they have put in place other funds. They have a $50m senior loan from a US institution waiting to complete and a $1.8m Darwin facility of redeemable notes against shares and warrants which IOG has some discretion over share sale timings, also Darwin has loaned the company £500,000. The company can also look to farm-down some of the assets and there is the potential for a junior loan as well.

Like a number of UK independents the market cap of IOG is way below what the company should be able to deliver over the longer term. This is not an exploration play and as such doesn’t carry quite so much risk or reward but in a way it may actually be a better thing for it, the production hubs strategy looks very solid and as the title suggests it has the look of Venture Production about it. I like the look of the team and the assets, if the 28th round is kind to them then there is plenty of upside and with the funding sorted out, the next few years could be an exciting journey.

Chevron produced its results on Friday and despite slamming the whisper the market was a touch disappointed. Coming in with $2.98 against consensus of $2.66 earnings per share should have been enough but yet again the market didn’t like the 1.4% fall in production to 2.5m b/d. So far in the results season the winner looks like being Shell which I think is about right as there is still much good news to come and they are well ahead of target in the disposals timetable.

I’m sure you spotted that Weir Group has relieved Merrill Lynch of its duties as corporate broker in a brief announcement this morning. Apparently there is a conflict of interest situation as Merrill’s are also brokers to IMI who are definitely a competitor for markets and clients and there must be a strategic overlap all over the place. The scope for mischief making is massive though with the Mark Selby background and I suspect both companies are on the lookout for deals making the ML situation totally untenable, if you could act for only one, who would it be….?

And Bowleven got final authorisation for Etinde today and whilst never in doubt its good to see the ink on the paper. My recent turnaround on BLVN has been modestly successful although as ever with them slightly nerve-wracking, I am still really keen to catch up with them as I would dearly like to have an idea of strategy from here.

The C Games finally ground to a halt as Kylie, Lulu and Deacon Blue serenaded Glasgow and welcomed the Gold Coast in Australia. Yesterday saw those long distance bike rides with Lizzie Armitstead and Emma Pooley bringing home gold and silver for England and Geraint Thomas the gold for Wales in the men’s, there was a bloke miles out in front for ever I don’t have a clue what happened to him…  The best thing of all was of course seeing Ussain McBolt draped in tartan and with the inevitable gold medal, apparently he is now going to concentrate on the 200m and targeting 19 seconds… 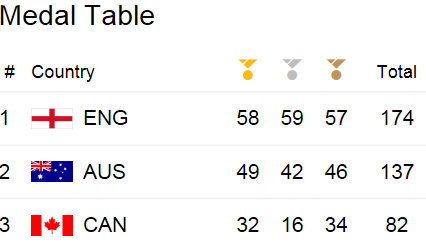 Rory came from behind to beat Sergio Garcia again in the Bridgeston Invitational this time and will be very short in the PGA, sad to see the Tiger limping off though but it makes Tom Watson’s decision for the Ryder Cup much easier.

It was the T20 Blast quarter finals at the weekend and two of the favourite teams in Notts and Essex  failed to qualify for semi-finals day, however August 23rd will be a smasher with four excellent teams in the play-offs. After we went to press on Friday Jimmy Anderson was cleared of any charges made by the Indian team so he gets to play at his home ground on Thursday, as might the mighty Finn as he replaces the injured Plunkett in the squad.

And Frank Lampard has signed for a loan spell at Man City which has infuriated Arsene Wenger who doesn’t approve of one bloke owning loads of clubs and making them feeders for the Champions.