The WTI price above is a bit spurious as the expiry now means that September WTI is trading at $102.01 and the differential is not quite as low as it seems from the above.

With confirmed documentation as mentioned yesterday, that non-professional investors have taken another 25% off the table and I expect more at the end of this week the market looked at the inventory stats from the API yesterday. At 550/- draw in crude was much less than forecast and way down from last weeks numbers so lets see what the EIA do tonight. In the API numbers there was a big build in gasoline and distillate stocks of 3.6m barrels as refineries increased run rates which makes sense of the crude draw last week.

Internationally, the E as it should now be called, i.e. European without the Union, foreign ministers got together but couldn’t come to an agreement about sanctions. France is concerned that it may be stopped from selling Putin two aircraft carriers and the mighty German economy runs on Russian gas now that they have banned shale and quit nuclear…

Nabors continued with the bullish mood of the US service companies and earnings beat the whisper by a cent at 24c. Again the US operation led the way with improved pricing and ‘ a significant improvement in rig activity’. Completion and Production Services recorded sharply improving pricing and utilisation and as with the others, international continued to deliver. I have banged on about what Hunting said back in the spring, they had seen a material pick up in activity and hadn’t seen the capex cutbacks from some majors affecting particularly the US market. Nabors said ‘ it is becoming increasingly apparent that virtually every element of our business is experiencing improved fundamentals manifested by utilisation and pricing’. With the C&J deal going through here is another US service company hitting the straps and firing on all cylinders.

Heard on the street that Tullow have been pleasantly surprised by its seismic data in Namibia and have identified several very interesting prospects.

To Chariot where on Monday night it was announced that a placing was taking place to raise $15m. I am seeing Larry tomorrow so I will keep my comments reasonably brief this morning. Firstly, I have been a keen buyer of Chariot since I first met Larry and heard the story of ‘New Chariot’, turning me round was not easy, the stock had been a disaster previously but I liked the four country spread and the fact that the company was fully funded with few if any remaining commitments. So when I heard that the company had been on the road for ten days raising money they said they didn’t need, in the process bring the share price down over 20% I was flabbergasted. They probably lost half as much in market cap as they raised, surely they could have done this better. I had an issue with Faroe recently about spending so much time marketing and this is the same. See chart, I rest my case….and I could have shown the 6 month chart which starts at 28p……

Anyway, rant over, the proceeds will pay for ‘acceleration and continued development of the portfolio to maintain strategic advantage and mature assets for drilling’, in Brazil and the other $7.5m will go into a new venture which we don’t know about yet but is in an existing country. So you’ve got a 25% chance of guessing right and when you hear what it is you will be expected to gasp with appreciation. More later but my BUY recommendation which I suspended yesterday remains so,  watch this space. 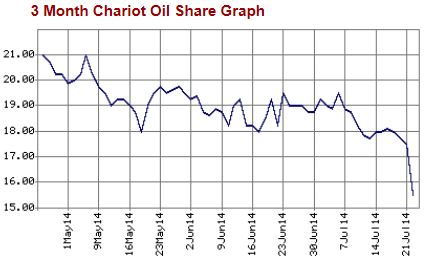 The Commonwealth Games start today with lots of running and jumping around Glasgow, will the opening ceremony be evocative of the host city I wonder……..(Think deep fried Mars bars, Glasgow kisses…)

Yesterday I elevated a former cabinet Minister aged 86 to the post of former England wicket keeper, shows my age and that I was going too fast! Buttler correctly comes in for the 3rd test starting at Southampton on Sunday.

More football news, kept out of their own stadium due to above mentioned running and jumping, Celtic cruised through to the next round of the Champions League beating K R Reykjavik 4-0 at Murrayfield. And the World Cup has thrown up another big signing, James Rodrigues signs for Real Madrid for £71m.

And would you believe it, former Ascot Gold Cup winner Estimate, owned by the Queen and trained by Sir Michael Stoute, has failed a drug test and has apparently been on morphine -who will take the rap for this I wonder, these Royal Families and their horses eh?