Firstly my apologies to those people who got the blog very late last night. You can imagine how upset I was to find out that although the blog had gone to Twitter and the website some e-mail readers hadn’t received it, especially as it was a bumper effort!

Today all is quiet, traders tell me that the market was a bit eerie yesterday and the big Japanese buyer didn’t come out to play apparently leaving the market listless. This morning Brent is drifting again as Iraq has quietened down and indeed shipments for choice are apparently slightly up.

The company announced yesterday that it had signed an energy infrastructure deal with First Reserve worth around $1.25bn. The JV will purchase assets from IES and also in new projects. In its first deal First Reserve is to buy 80% of PFC’s floating and production facilities for $450m. This takes the treatment of IES in the post Inglis days almost full circle and will keep the division active but let PFC concentrate on its key core activities whilst also taking some capital off the table.

Every picture tells a story and you should take a look at the Providence chart for a first hand demonstration on how to destroy shareholder value, mainly through the extended farm-out period. The figures show an increased loss but all the rest of the spiel is frighteningly familiar, in particular the piece about Barryroe. I think that the same sentence regarding the farm-out has been cut and pasted in presentations for a long time now and its beyond funny. I happen to feel that there may well be real, successful activity offshore Ireland and that the recent Dublin conference demonstrated that there is genuine big company interest in the area but Providence may not be the way to play it, there is undoubtedly plenty of upside in the company but right now I want to see some proof of activity. Conference call shortly, if anything changes watch this space. 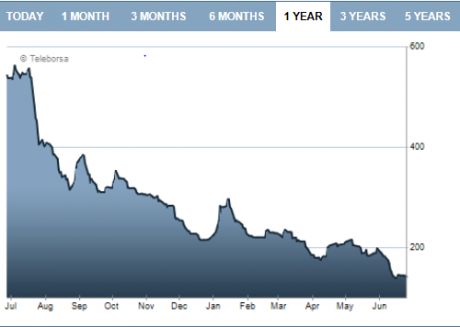 Bowleven has announced a farm-out of 20% of its Bomono permit in Cameroon to AFC. They will farm-in for the cost of two exploration wells at a cost of around $13-15m. This seems eminently sensible and continues the recent spell of positive statements by the company. The market however is still a touch cynical and until I get to have a face to face with the company I really am not certain about the direction it is taking. I thought I had been quite smart to put it back as a trading buy call but it has broken down from the high, a pretty crucial level on the chart here..

The company has announced results from the third development well on Stella which show a flow rate of 12,492 boe/d of good quality 45º API crude oil. This is more good news from the company which remains on my prime list of E&P calls this year.

At the risk of repeating myself I wanted to mention that the extended interview I did for IG UK earlier in the week about the situation in Iraq is now up on the website. I remain very positive on these two companies, indeed the news on GKP post that tape has been taken well by the market place, hopefully a bit more credibility and the ability to look at the asset value and not so much at the corporate shenanigans….

Its a rest day in the World Cup, what will we do? Last night saw the US progress at the cost of Portugal and Ghana, no mean achievement in that group but Belgium will surely be too strong for them…Christiano is on his way home to spend a bit more time with his coiffeur and to get a bit more buffing…

In SuarezGate the Uruguay lawyers have been up all night and hope to overturn the ban today, if they don’t then the HubCap Stealers have another few months of the season without him but probably still shelling out £250,000 a week for the privilege…Luis has as you know been banned from football for four months, the poor boy will starve to death. He must have been in the queue for teeth when god was dishing out the brains…

Muzza takes on his first seeded opposition today and so far there still haven’t been any surprises.

Sir Bradley Wiggins has been dropped from the Sky team for the Tour De France, no surprise there either..

Ussain Bolt has announced that he is available for selection in the Commonwealth Games in Glasgow but only for the relays, that is one chip shop to  another then.