I hope that you enjoyed the weekend, the UK basked in near tropical (for us!) conditions predicted yet again by weather legend David ‘slips’ Malpas, of Quilter Cheviot AM.

The oil price remains at around recent highs, WTI because inventories weren’t too bad although the stock shortage in Cushing has merely been moved to the Gulf cueing more demands for the export ban to be lifted. Brent remained solid as the Libyan crisis worsened at the weekend with massive unrest and militia violence closing oilfields and exports falling back to around 200/- b/d, my traders are properly bullish about Brent at the moment.

The Lex column in todays FT talks about last week’s shale  gas deals as if they were property assets which is a fair point but hardly the issue as the search goes on for the game changing discovery for company and country. To suggest that the companies could not survive without near-term cash flow totally misses the point, this is the case with all exploration prospects and farm-outs are a valuable way of funding and even sometimes indicate just how cheap the equity might be. The FT article may also have a touch more credence if they had got the correct company in its article, Alkane Energy is tying up with Egdon Resources not Alkane Resources…

Interesting times for BP as they and other super majors find themselves trying to break into new highs after impressive runs so far this year. At 508p BP has the opportunity to do such a thing so it is worth keeping an eye on it. More interestingly, Bo Diddeley is registered to attend the St Petersburg International Economic Forum where he will hobnob with a number of Russian oligarchs who are also there and who are of course on the US banned list, ooh err. 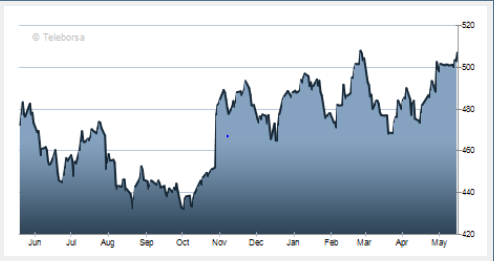 Its funny how companies and boards often worry about the share price, almost exclusively suggesting that it is too low and that the market doesn’t understand them. In that scenario one normally advises not to panic and the quality will out, just stick to your knitting and deliver the goods. Sometimes bad press overcomes the solid fundamentals and this should be avoided at all costs such as the case with Kentz which is as you know, a favourite of mine in the oil service sector. The FT reported on Saturday that they had become the first company to lose a new binding vote on future management pay since the new regime was put in place and the Observer yesterday rubbed salt into the wound by calling it ‘ a moment of shame’. Shares in Kentz as I said on Friday have slipped in recent months and are about a pound off the highs, this puts the company on significant rating discount to the rest of the sector, a discount that is undeserved given the very solid trading news that the company has reported recently. At 660p I think that the shares are very attractive and provided the recent bad press is behind them I would call it a good buying opportunity, I hope to get a meeting with Chris Brown before long and will report back after that.

I also mentioned Aminex the other day, a company I have had mixed relations with over the years but looking much more interesting now. New CEO is Jay Bhattacherjee whom I know and rate highly and I have a meeting coming up, I’m sure he will fill me in on recent developments. Today’s IMS again focuses on the ‘world class acreage’ in the Ruvuma Basin, a phrase that is sometimes over used but maybe the case here. A high density 2D seismic programme is under way looking for leads and of course any success can be monetised swiftly with good infrastructure nearby. On the watch list only at the moment but worth keeping an eye on.

As the football season blissfully ends (although I’m sure that the Coup Mondial will occupy us in the summer months), trophies are decided and The Gooners finally, after a nine year wait, managed to get their hands  on some silverware winning the FA Cup on Saturday. Much more exciting was the 130 year wait ended by the mighty St Johnstone who won the Scottish Cup on Saturday beating Dundee United.

In Europe Barca couldn’t beat Athletico who won the title and got the Barca coach the sack, Athletico have now got  their sights on the Champions League Final with Real…..

If you watched the rugby on Friday night the match between Northampton and Leicester was top draw and the Saints winning at the end was an amazing achievement after a bruising game, very well refereed if I may say so.

The T20 ‘Blast’ started at the weekend with many fixtures, too may to analyse here but Middlesex looked like they gave it away, twice and how Surrey lost to Sussex is worrying, more later on that.