After the recent modest rally crude fell yesterday and this morning have drifted a little more. Yesterday a couple of reports came out from respected industry bodies, Opec in their demand analysis dropped its estimates for the call on Opec crude by 50,000 b/d to 29.65m b/d saying that whilst world-wide demand was unchanged increased production elsewhere has led to a fall in need for Opec oil.

The other study was from the EIA who have produced their revue of US crude reserves for 2012 and its a blistering read if you are short of something to do at the weekend… Reserves in the US at the end of 2012 were 33.4bn barrels, up 15.4% on 2011 and at the highest level since 1976. The three best areas are unsurprisingly Texas, the Gulf of Mexico offshore and North Dakota.

Chevron and YPF have announced that they are stepping up their capex in the Vaca Muerta shale project in Argentina in a substantial way. Between them they are to add $1.6bn this year by drilling 170 wells in the area, up from a projected 140 wells before. A spokesman said that the Vaca Muerta was ‘one of the most exciting shale plays in the world today’.

Interestingly there is a way for UK investors to play this via a stock I have written about very favourably this year. Andes Energia has a significant acreage exposure to the Vaca Muerta and is listed in London. I have met the senior management of the company several times and am very impressed and having had a strong run the shares have come back a bit, a perfect opportunity I would suggest. 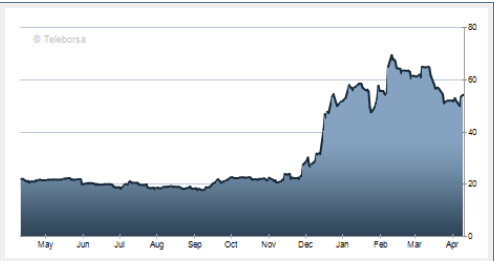 An operational update from Trinity today which is one of my preferred stocks in the sector and which has good growth opportunities. The update shows 1Q production of 3,978 boe/d and operationally the company is in pretty good nick. On the East coast which is probably the most exciting area the upside is good but a mud pump failure has caused some delays whilst it is being replaced. I still think that Trinity is well placed and having seen Range recently am even more happy about Trinidad as a place to operate.

Mediterranean Oil and Gas have announced that following their comprehensive win over Leni in court that the first stage of the costs awarded have been paid. MOG are expecting something north of £1.5m and so far £600,000 has been paid. I am looking forward to meeting with Bill as soon as the close period is over.

Tullow has completed its 3D seismic work on the EL 0037 block offshore Namibia and although the extended analysis will take several months an early read will give them and their partners an  early guide to potential prospects and leads.

Its the London Marathon this weekend and Mo Farah is hoping to go from Olympic double gold at much lesser distances and succeed over the longest trip. I wish him and all those thousands of people running and their charities all the very best.

In cycling, Sir Dave Brailsford has retired as the head of the GB Olympic team in order to continue his work with team Sky. He will always be associated with the massive success at recent Olympics and has been a  transformation in British cycling.

At 11 o’clock Chelsea will find out their opponents in the Semi Finals of the Champions League, no easy games now but sure they will be hoping for Athletico and for everyone else who might then see either a Chelsea win or the possibility of an all Madrid final…

In the Premier League there is really only one fixture and according to some it may take to title back to Anfield again. The HubCap Stealers entertain the Noisy Neighbours and the winners should then be favourites for the title. The other two best fixtures are at the foot of the table as Fulham host the Canaries and the Eagles host Villa.

In the Masters Bill Haas has an early lead but Adam Scott is right behind and even Rory isn’t far away, an interesting weekend indeed but as they say, but the course isn’t the same without the Eisenhower tree on the 17th.