Fairly quiet ahead of the FOMC meeting tomorrow, unsurprisingly the Libyan rebels didn’t hand over the 3 oil ports as the Government had expected over the weekend which ticked the Brent price better, this morning it is about a dollar higher than the above.

As we have heard in recent months Aubrey McClendon is back and on Friday AEP, his new partnership filed, for an IPO to raise $2bn. Well a chap has got to have a decent amount to buy a few private jets to fly around in doesn’t he?

A red letter day for BG as it has announced first gas at Queensland Curtis LNG. Coal Seam Gas has flowed from the Surat Basin to Curtis Island for processing via a 540km pipeline. The delivery means that the project is not only on-time but within the $20.4bn budget.

Total wipe-out in court on Friday for Excalibur as  GKP were not only awarded costs but also the extra indemnity costs, so the total award as I see it is $23.1m. The amount in the court was already £17.5m and the company has made it very plain (by listing the names) that it will go after the people and corporates that are named in the release. Although it seems that some followers consider this to be disappointing, I think that it is as much as I expected and more importantly it draws a line under the litigation leaving GKP to move forward with the main market listing straight away.

Finance Director John Brown has resigned at Bowleven, a thankless job if ever there was one but reasons for departure at this stage are not given if possibly obvious. The recent funding fiasco wont have helped but his deputy Kerry Crawford is stepping up to the plate thus keeping it in the Edinburgh ‘family’ if you know what I mean…

The Carlyle Group has invested $200m for a ‘majority’ stake in Discover Exploration, the venture formed by the team that brought you and sold Cove Energy. Interestingly the money is for drilling offshore Comoros and offshore New Zealand which is a relatively new hydrocarbon province.

Having talked about EOG a few times lately it seems that the positives have been outweighed by the nightmare of having to raise money in the face of a rapidly falling share price. Looking at the chart, and unfortunately one doesn’t have to go back very far, it seems that some dealers in the shares were either remarkably astute or that information about the placing had, how you say, managed to get into the wrong hands. Suffice it to say that the raise of £4m this morning at 6p, although very necessary has proved to be rather expensive, there must be one or two advisors heads pointed to the ground this morning.

On to the bread and butter though, the money, however expensive, will be used to drill onshore UK 1Q 2014 at Wressle with Egdon, to continue on the Irish Atlantic margin with Kosmos and to have enough in the wallet to participate in the next Irish licensing round. 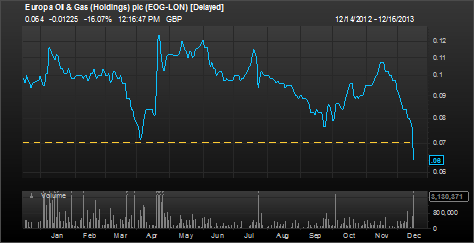 An interesting weekend indeed on the football front with Spurs taking a hiding at the Lane at the hands of the HubCap Stealers which cost AVB his job, sacked in the morning is what they were singing and Mr Levi duly obliged. The noisy neighbours are indeed just that at the moment, handing out another 6 goal dollop of medicine, this time to the Gooners, we’ve all been there now!

But the Champions League draw has just happened and would you believe it, the N neighbours have drawn Barcelona and the Gooners, Bayern Munich with the away fixtures second, winning the group now takes on added significance. For Chelsea my prediction has turned out eerily correct, they get Galatasaray with Mr Drogba whilst Man U get Olympiakos…

Talking of medicine the  cricket team are an abject embarrassment and the weekend didn’t spare us from further misery, only a little over half way and no sign of anything but a whitewash…

To the Sports Personality of the Year award where shoe-in Muzza walked off with the trophy albeit from beside a pool somewhere stateside. Fond memories of thrashing the Aussies were rekindled as the British Lions won the team award.