Where do I start with so much going on and in the middle of a really good road show? Well firstly to apologise that an article yesterday was transposed so you got two on oil price fixing and no Chariot!

One thing you are going to hear a lot from me about for the next few weeks is the Presidential election in Iran. We have rather nailed our colours to the mast on this one, not because we know who is going to win, let alone run, but the possibility exists that if a moderate should take over then a more pro-west, less damaging policy may be implemented. The chart below is deliberately a two year price chart and it shows what happened to the oil price from January last year when sanctions were announced, the price went from $102 to $125. If the market were to even think that this oil (say 2.5m b/d) were to reappear on the market anytime soon then last year’s price hike gives you an idea of the downside. At the moment, conservative Rafsanjani is still on the ticket….

The ‘OilpricefixingGate’ story will run and run and almost certainly not result in any marked change in the visibility of the pricing model. So far no one comes out of this well, Javier Blas in the FT today gets stuck into Platts who yield a lot of power in the $2.5tn energy market. Blas confirms what industry participants already know, that Platts has powers ‘ more akin to a government regulator than a private company’, it can decide who participates in the “market-on-close” window and can penalise companies, banning them from the process, known in the industry as ‘boxing’. This process, that is apparently un-appealable by the companies, means that Platts is according to the FT “judge and jury” which sounds pretty odd to me.

Next with its head on the block is BP, another smart piece of work, this time by Emily Gosden in the Telegraph where she finds that BP ‘opposed regulation of key oil price agencies’ when they said to Iosco that “ we would strongly caution against direct governmental regulatory oversight” and “we remain unconvinced of the need for the application of regulated exchange-type regulation”. Call me old-fashioned but when a market participant urges strongly against regulation it is usually time to open up the books and see what falls out. 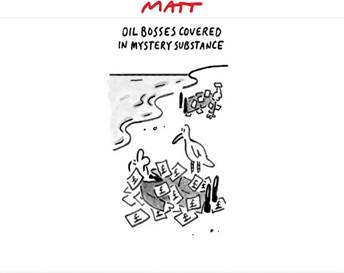 Yesterday the oil price was quite firm, an early hiccup after the US factory output figure fell in April was turned around by the inventory stats. Now I have nothing against the ‘analysts’ who regularly guess what the inventories might be but yesterday they even got the sign wrong! A forecast rise in crude stocks of 1.83m bbls turned into a fall of 624,000….

The 14th round of UK onshore licencing will take place next year according to Michael Fallon, the new Oil Minister who is bringing a whole new philosophy of hard work to the department that looked like it was never going to do anything. With the Treasury commandeering the unconventional programme and Mr Fallon getting down and dirty at DECC then Britain is officially “accelerating” its shale process. Usual suspects to benefit, IGas, Alkane, Egdon, Dart and to that list add Amec whom the Government is using as an engineering consultancy on this one.

In a truly astonishing move, BP have, according to Robert Peston, BBC business editor, asked the Prime Minister to intervene over the escalating cost of compensation for the Macondo disaster in 2010. This is a case that BP agreed to last year and accepted that compensation was due; trying to say now that the people and companies, such as fishermen and restaurant owners, are ‘abusing systematically’ the court-approved process is rather peculiar to say the least.

Of more importance are the comments by the company regarding its financial situation, one we have ourselves speculated about, this is the exact copy from Robert Peston.

The financial burden of paying fictitious and inflated claims may even make BP a takeover target, it fears. Our business editor said: “According to BP sources, the rate at which cash is leaking from the company could turn into a serious new financial crisis for the company, putting at risk its dividend and making it vulnerable to a takeover by another oil company.

This is at a time when the Prime Minister is said to be ‘hugely concerned’ about OilpricefixingGate, hmmmmmmm.

Q1 IMS from Petrofac this morning states that project margins are in-line with expectations and that although the 2015 earnings target is very much on-track, the net profit growth this year is going to be ‘modest’. This would normally be bad news but it is primarily due to rephrasing of the In Salah project in Algeria and I would expect that any profit ‘lost’ this year will be made up next year. Group backlog increased to $12.1bn up from $11.8bn and a number of good contracts have been secured this year with a number of ‘attractive opportunities’ across the group.

The shares have drifted back today after the recent rally, long term, PFC is still looking excellent value with some very good and sizeable contracts such as in Mexico and other offshore work.

Another IMS, this time SOCO which is a favoured E&P play continuing to deliver the goods in Vietnam. Production in the first four months was 18,538 b/d up 60% y/y in line with expectations and the first phase of the TGT FPSO was completed with sustained production of over 60,000 b/d. Two wells will be spudded shortly, an appraisal on TGT and the Lideka East well in the Republic of Congo.

Debt free and with cash and liquid investments of $328.5m SOCO is very well funded and well placed to continue to grow, chart shows faith vindicated.

The company came in at the higher end of production guidance for this year at 47,064boepd. Headline financial numbers were down across the board reflective of the realised oil price of US$107/bbl versus our model forecast of US$100/bbl.

Aggregate flow rates from Simrit-2 totalled 19,641bopd, only a slight increase on previous guidance the well will now be put on an extended flow test. Despite spending US$150 this year in Kurdistan, it is unclear as to when this will come on-stream at significant rates of production. Uncertainty surrounding the political situation looks like the biggest barrier to major investment.

We would have liked to have seen some 2014 production guidance today. With Afren exiting cost recovery in Nigeria, production will be impacted. At this time it is not clear to us where the replacement production will come from.

Overall a positive IMS today, but more visibility on production growth is required.

IMS out this morning. H1 13 production is now guided at 58-60kboepd (H1 12: 58.4kboepd) and full year is maintained at 65-70kboepd. Capex guidance is also kept at US$1.2Bn which matches the estimated net debt position at 30 April, with cash and undrawn facilities of US$1.1bn.

Overall there are no shocks today and Premier’s strong turnaround story continues. Exploration has been excellent so far this year with all four exploration wells being successful. Looking forward first gas from the non-operated Rochelle field in the North Sea remains targeted for Q2/Q3 this year and the operated Dua, Solan, Anoa Phase 4, Pelikan and Naga projects remain on track for first oil/gas in 2013/2014. The high impact Lacewing well is also currently drilling in the North Sea while the play opening Ca Voi well offshore Vietnam is expected to spud in early June.

In a separate announcement the company states it has been awarded three blocks in Brazil’s 11th Round. These are located in deep water basins offshore North East Brazil in largely under-explored areas and contain prospects and leads capable of delivering between 250mmbbls and 1bn bbls each.

We continue to think Premier remains one of the best stocks to play this year. 2013 guidance is looking achievable and there could be some further traction from the exploration portfolio- all supported by improving operating cash flows and the acquisition of this new Brazilian acreage.

Heritage has also released an IMS. Net production for Q1 averaged 7,373 bopd (605 bopd, Q1 2012) with total revenue of US$236m, of which US$235 was from the interest in Shoreline Natural Resources (OML 30). Gross production from OML 30 was c20,000bopd and is expected to ramp-up this month to average 35,000bopd for the year now strike action has ended and manifold issues are fixed.

The balance sheet remains our biggest concern: Cash was US$184m at 31 March, excluding cUS$405m related to the Ugandan tax dispute. The company is refinancing its bridge facility via a 5-year US$550m from June which may alleviate some pressure, but we think the portfolio looks thin and we question how much acquisitive growth can come about. We will have to wait and see if the Nigerian production targets can be met, but the Ugandan CGT issue continues to weigh and a quick resolution looks unlikely. We would not be buyers of the stock at this stage.

And the missing bit from yesterday, Chariot Oil

Chariot has been successful in its bids for full ownership and operatorship of four shallow-water exploration licences, BAR-M292, BAR-M-293, BAR-M-313 and BAR-M-314, in the Barreirinhas basin, offshore Brazil. These cover 768km2 and are located 70km offshore in water depths ranging from 25m to 1,700m.

The company still needs to sign a concession agreement with the Brazilian National Agency of Petroleum, Natural Gas and Biofuel. Under the terms of the Agreement, the company will acquire and process 3D seismic covering the entirety of each block during an initial exploration period of five years. This new acreage helps diversify the portfolio away from Namibia which we feel is a positive given drilling results so far in the country.

The market is waiting for the result from HRT’s well, which is long overdue as there is read through to Chariot’s acreage. A negative result from this well will also be negative for Chariot.

And McLaren has ditched Mercedes and will go back to Honda engines from 2015.

To cricket and the bad news is that three Indian cricketers have been arrested over allegations of spot-fixing in the IPL, all come from the Rajasthan Royals. 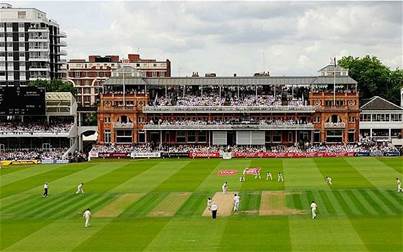 And as you can see from my picture of Lords the First Test against New Zealand started this morning. As I write England, who won the toss and are batting are 43-0.